The Role of Branding in London 2012

The 2012 Olympic Games are soon to start, and there are a growing number of bloggers and websites, especially those from the social media sphere, raising awareness to the controversial role branding is playing in London 2012.

The London Organising Committee of the Olympic and Paralympic Games, or LOCOG for short, have put in place some really aggressive guidelines to protect the interests of the official sponsors.

I personally believe this subject will only get more heated as the games begin, so hopefully this post will help you to get a better idea of what this fuss is all about, help you avoid misusing the Olympic brands and understand what you can and cannot do during the games.

The Olympic Symbol (Protection) Act (1995) and the London Olympic Games and Paralympic Games Act (2006), are pieces of British legislation put together exclusively for the London 2012 games, and both acts led to a set of remarkably aggressive guidelines which prevents non-sponsors from even using words like ‘London 2012’, ‘Olympic’ and ‘Paralympic’.

Controversial? Yes, but let’s try to understand what motivates such draconian legislation.

On a recent BBC radio show, the committee’s chairman Lord Coe was asked about the heavy-handedness of such legislation, and he claimed that the additional legislation was essential “in protecting the sponsors who come to the table with a lot of money to help us stage these Games”.

The London 2012 brand is also vital to the funding of the Games and is the London 2012 Organising Committee’s most valuable asset. To ensure we maintain both the emotional and commercial value of the brand, we need to carefully control its use and prevent its unauthorised exploitation.
You can help support London 2012 by understanding and respecting the need to protect the brand, and by not using our brand or otherwise creating an association with the Games unless you are entitled to do so.

Some may say this sort of corporatist attitude is miles away from the Olympic spirit of fair play, and the entire event has been hijacked by commercialism.

On the other hand, consider this: without some sort of safeguard to prevent competing athletes, event organizers, Olympic workers and even visitors to post a photo of their Nike shoes inside an Olympic venue or share a video buying lunch in the Olympic village using their Amex card, would Adidas and Visa agree to sponsor the games? I don’t think so.

The fact is that strict guidelines were set in place to protect the sponsors who have invested millions — about $700m at the time of writing this article — to help make London 2012 the greatest event in the history of the Olympic Games. Some argue the event would not even be happening in London if not for these additional pieces of legislation.

If you are planning to make a reference to the upcoming London 2012 Games, I strongly recommend reading the London 2012’s UK statutory marketing rights and LOCOG’s London 2012 Brand Protection Guidelines. These documents were put together by the Olympic committee to help non-sponsors understand what restrictions are in place regarding the use of the protected game’s marks.

I’ve read through these documents — which together have more than 100 pages — and I must admit they have covered every possible angle. It’s one of the best brand protection guidelines I’ve ever laid eyes on, so I would strongly advise against any marketing shenanigans.

The important thing to remember here is that all of the official names, phrases, trade marks, logos and designs related to the 2012 Games and the Olympic and Paralympic Movements, which together are known as Games’ marks, are protected by law in a variety of ways.

If you don’t want to risk copyright infringement, stay away from these symbols: 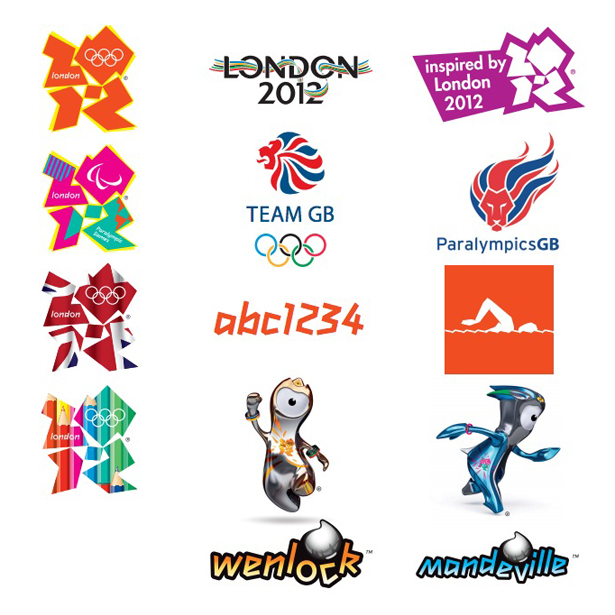 And any of these protected words:

I can’t really stress this enough, while these are harsh guidelines, you are still able to take advantage of interest in the Olympic Games and create a marketing campaign for your business, service or product; but you must read their guidelines and follow them thoroughly.

As a matter of fact, the London 2012 brand guidelines includes a wide range of examples that do not include any form of copyright infringement against the Games’ marks. 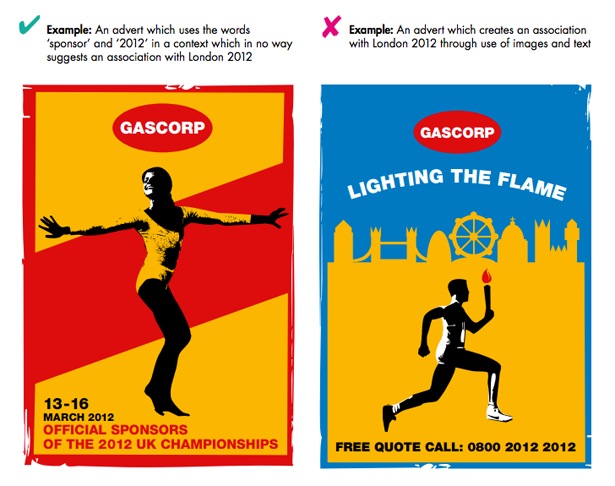 Example of what’s acceptable, and what is not, extracted from the London 2012 Brand Guideline.

If you’re a non-commercial entity you can create an association with the Games and use its logos through the London 2012 Inspire programme, and schools who join the Get Set network can enjoy the same benefits. Read the London 2012 Guidelines for Non-Commercial Use for more details.

The major reason behind the over-zealous protection guidelines is to prevent ambush marketing activities. After all what’s the point of investing millions sponsoring the Olympic Games if you can run a below-the-line campaign using social media instead?

What is ambush marketing? Here’s a definition straight out their brand guideline.

Also known as parasitic or guerrilla marketing, ambush marketing describes a business’ attempts to attach itself to a major sports event without paying sponsorship fees. As a result, the business gains the benefits of being associated with the goodwill and public excitement around the event for free. This damages the investment of genuine sponsors, and risks the organizer’s ability to fund the event.

Then it gets easier to at least understand, if not condone, why these guidelines are necessary to protect the value of the Olympic brand and the official sponsors’ investment.

Unfortunately there’s no way to prevent an ambush marketing campaigns without also taking away some of the freedom of athletes, which are required to use the Olympic Hub, the official London 2012 social media outlet, rather than Twitter or Facebook.

Is that fair? I’m not sure, but I’m afraid there’s even more, the Olympic Games Monitoring is a website which volunteers will use to help monitor the internet for any misuse of the London 2012 copyrights.

Starting to get a little bit to creepy, don’t you think?

This is an issue which I believe will make many people frustrated, specially if social media accounts begin to be suspended for posting photos, videos and using protected terms. Depending on how hard LOCOG’s arm falls against freedom of speech, this can easily turn into a PR disaster.

The official London 2012 brand guidelines will help preventing worldwide brands from operating opportunistic ambush marketing campaigns, but it seems impossible to execute such a grand plan without any collateral damage.

One of the most controversial plans includes enforcing a one-kilometre brand protection zone around all Olympic venues, by removing any brands, promoting adverts and clothing, preventing the selling of unofficial food or drinks, and believe it or not, using a non-sponsor credit card.

I suspect this will leave everyone feeling like they just visited George Orwell’s 1984 Olympic Games.

Many local small businesses will also be put off creating their own Olympic-inspired marketing campaigns for fear of feeling the long arm of the law, and without a dozen of legal experts to help them out, should they risk copyright infringement?

While I’m not suggesting that small business should not pay attention to the London 2012 brand guidelines, I’m inclined to believe that LOCOG will apply some level of discretion when enforcing their copyrights against local small business with legitimate marketing campaigns.

With so much controversy around this subject I could not avoid mentioning the brands behind the story, these are the official sponsors of the upcoming Olympic Games. The complete list can be found on the London 2012 website. 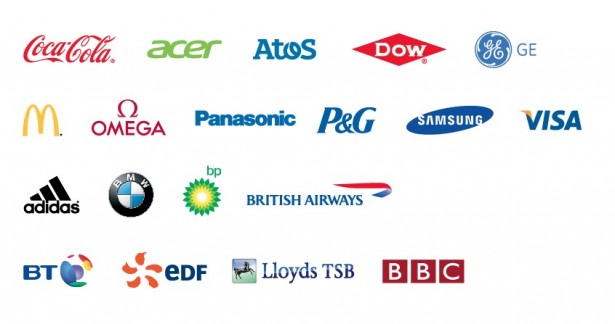 Good-spirited companies helping to make London 2012 the greatest show on Earth or worldwide greedy corporations taking away the freedom of small local business? What do you see when you look at these logos?

The power of branding

There are many ways to look at the role of branding in this year’s Olympic Games. Where some see nothing but a brand looking to protect the interest of its investors, others may see the greedy interests of worldwide corporations overcoming the Olympic spirit.

Either way, one must acknowledge branding is a powerful tool.

When companies pay millions in sponsorship fees just to acquire the right to associate their own brands with the Olympic Games, that says a lot about the value of branding. This whole controversy serves to show that branding is the ultimate marketing activity, and if you haven’t started using it yet, you should at least start thinking about it.

LOCOG have, and they raised $700m in sponsorship fees with it. 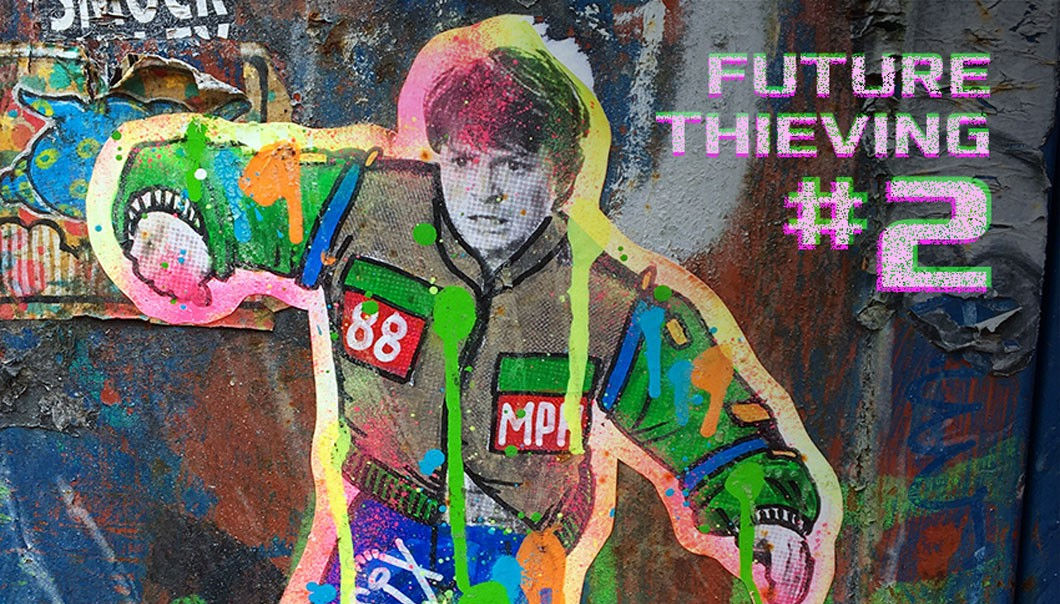