Most creative professionals have no problem coming up with ideas.

In fact, too many ideas is more often the problem rather than too few. Where we usually run into issues, though, is in the follow-through.

How do we take the brilliant ideas that we come up with on a daily basis and see them through to completed projects?

That’s exactly what the book Making Ideas Happen by Scott Belsky (the founder of Behance) aims to teach us.

He’s spent years studying the habits and methods of successful creatives who have a knack for following through on their great ideas and bringing them to fruition. He presents this information in a way that is both easy to understand and easy to implement.

The book starts out with an overview of how organization is often viewed by creative types as counter-productive to the creative process. Making Ideas Happen aims to disprove this theory, and to show why incorporating a bit of organization can go a long way toward following through with your ideas.

From there, it digs into the practicalities of setting up an organizational system that works within your existing creative workflow. There’s a definite slant toward using the Action Method (developed by Behance), but most of the principles discussed could be adapted to a custom productivity system.

Taking action is stressed throughout the first part of the book. Action steps are touted as the key to managing and completing any creative project. And the author has plenty of research and anecdotal evidence to back up what he’s saying. He’s also big on developing and customizing your own system.

…A methodology is only effective when it is practiced consistently. While every person’s system is different, the most productive people pay attention to the finer details of their rituals to keep themselves engaged. 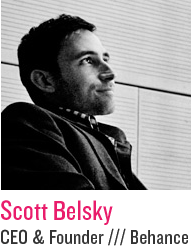 In the chapter on prioritization,  Belsky offers some excellent tips on managing your action steps so the most urgent work always gets done, but not at the expense of other important actions. Suggestions include learning to delegate, using a responsibility grid, and making a daily “focus area”.

One tip that might surprise many (included in the chapter titled Execution) is the advice to “Act Without Conviction”. This runs contrary to what is often preached in all sorts of leadership and management classes and workshops.

…For the creative mind, the cost of waiting for conviction can be too great to bear. Waiting builds apathy and increases the likelihood that another idea will capture our fancy and energy.

Considering the speed with which most creatives come up with ideas, the above advice and the section in which it appears should be carefully considered.

Other tips in the Execution chapter include being willing to kill ideas whenever necessary (“liberally” is the word used in the book) and to avoid meetings unless they result in measurable action.

From there, Making Ideas Happen goes on to talk about leveraging community to help follow through on your ideas. Enlisting help from those around you can greatly increase your chances of finishing the projects you start. Belsky talks about the three types of people most of us are surrounded by: the Dreamers (those who focus more on the ideas), the Doers (those who are obsessed with executing ideas and following through on projects), and the Incrementalists (those who can do both). Many people strive to become Incrementalists, thinking this will be the key to finally finishing all those projects they start. But even being an Incrementalist has its drawbacks.

With the ability to rapidly develop and then execute ideas, the Incrementalist finds him- or herself leading multiple projects (and, in many cases, multiple businesses) simultaneously.

Being an incrementalist can lead to splitting your attention and focus between many, many different projects. While sometimes this can lead to success, it can just as often lead to feeling overwhelmed and burnt out.

Making Ideas Happen also suggests that you share ideas with others.

The notion of “sharing ideas liberally” defies the natural instinct to keep your ideas a secret. Yet, among the hundreds of successful creatives I’ve interviewed, a fearless approach to sharing ideas is one of the most common attributes.

Sharing ideas helps to foster community that will help make your ideas happen. If you can gather community support for your project, it’s more likely you’ll find the motivation to follow through. Other benefits of taking a community-based approach means you’ll have others to turn to if you need feedback and to keep you accountable.

Competition is also touted as a helpful means to keeping motivated and on-track with your projects. Competitors can keep us on our toes and make us less likely to give up. But seeking out competition can often be a scary thing for creatives (or anyone else, for that matter).

The prospect of someone else competing and receiving fanfare for an idea that you had first is outright painful…One might argue that our ideas are an extension of who we are and who we hope to become. This is why competition taps into something almost primal, the Darwinian struggle for survival. 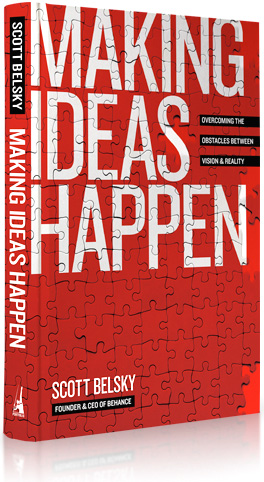 In other words, competition can be incredibly motivational. Even if the competition is friendly, it can still serve as a catalyst for pushing you forward.

The final section in the book deals with leadership capabilities. One key to being a successful creative professional is being able to lead teams of others. Learning to become a good leader isn’t something that’s often covered in design school.

But becoming a good leader isn’t rocket science. Fostering a good team can lead to a high level of support for developing new ideas and seeing them through. Good team chemistry can also lead to recognizing bad ideas more quickly and ceasing to work on them. Ideally, you want some team members who are good at poking holes in your ideas and showing you where the weaknesses are.

An entire chapter is devoted to managing creative teams. Methods for managing these teams include things like sharing ownership on your ideas. It can be difficult, though, for many leaders to give up enough control in their ideas that their team members actually feel a sense of ownership on these ideas.

Ownership is important, though, because team members who feel they have a stake in these ideas will put more effort into their development. One way to give a sense of ownership to your team is to get them excited about your idea.

Getting people excited about your idea, however, is just the first phase of sharing ownership. The second and much more challenging part is empowering team members to push the idea forward rather than micromanaging them every step of the way.

The final chapter might be one of the most useful to many creatives. It deals with managing yourself, arguably the hardest person of all to effectively manage.

Most creative leaders can trace their greatest obstacles to something personal—fear, insecurity, or self-imposed limitation.

Having an entire chapter devoted to managing and overcoming these obstacles is going to be incredibly valuable to a large number of creatives. I’m sure that most creative pros out there find that internal struggles are the hardest things to overcome in the creative process if they really think about it.

Making Ideas Happen is an excellent resource for those of us who have no shortage of ideas but often have a hard time seeing those ideas through to completion. It offers specific, actionable information on how to manage yourself and your team to achieve measurable results and create successful projects.

Making Ideas Happen is scheduled for release April 15, 2010, and can be preordered through major booksellers.